Katy Moran | Parasol Unit | till 8 March
Small abstract paintings that absorb your attention and stir imagination. The longer you look, the better they get.
Press Release | Katy talks about her painting process

Marlene Dumas “The Image as Burden” | Tate Modern | 5 Feb – 10 May
Extensive and probably the most significant exhibition of Dumas’ work to date in Europe. Opening on Tuesday, so photos will follow shortly.
Press Release and related events 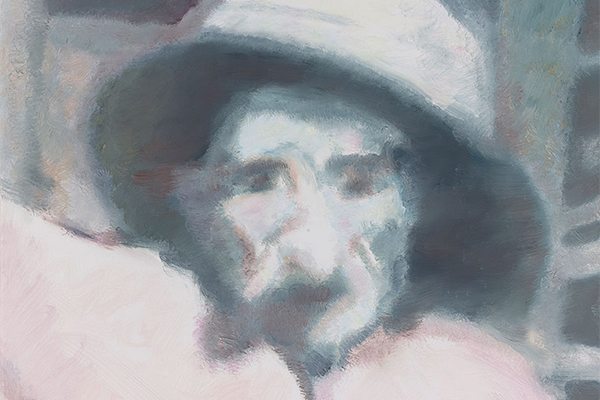 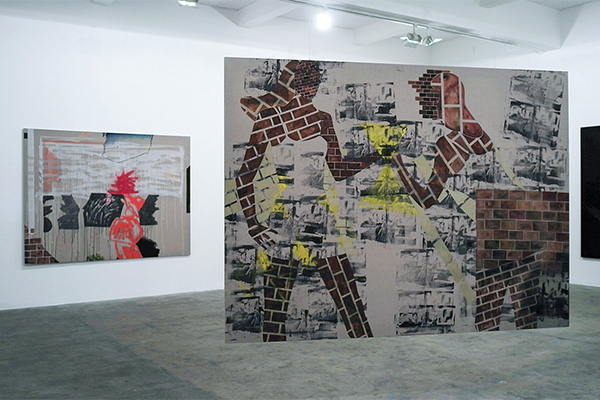 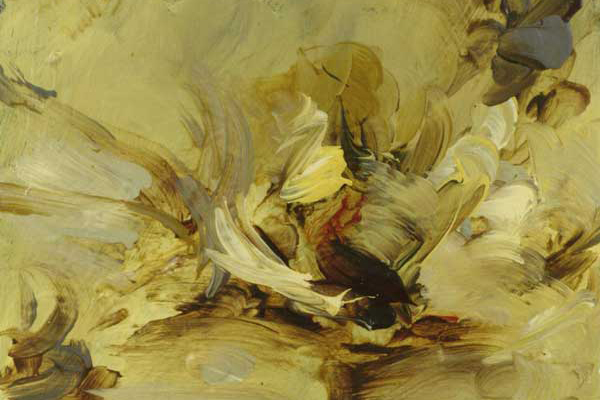 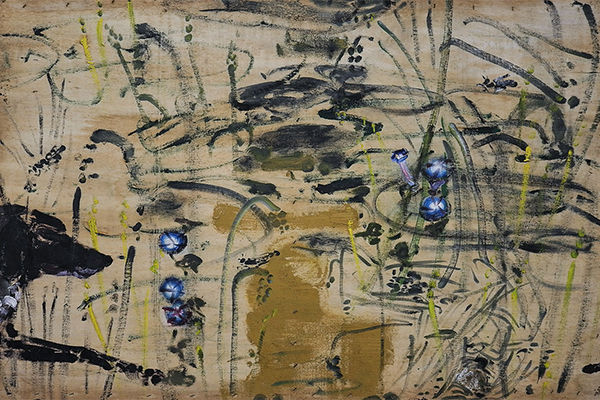 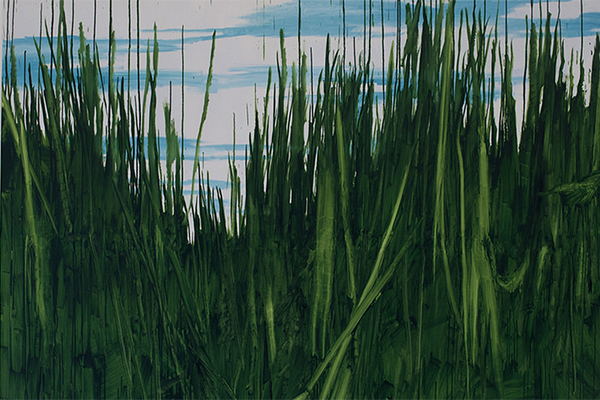 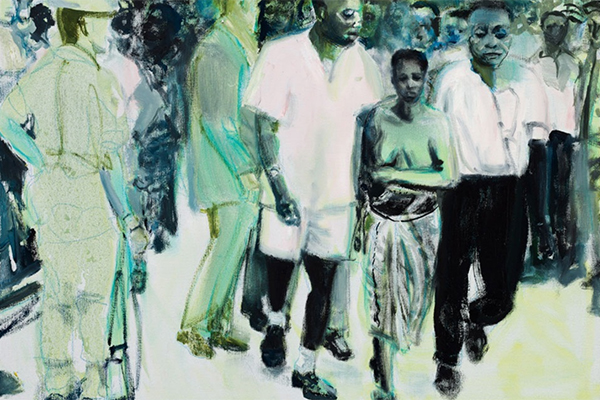 Also worth checking out:

-Alibis: Sigmar Polke | Tate Modern
Coming to London from MoMA, a retrospective of Polke’s rich five-decade career.
-Walead Beshty | The Curve, Barbican
12,000+ cyanotype prints covering the gallery from ceiling to ground
-Roy Voss | Matt’s Gallery
Collages made by cutting a word from the back of a found postcard and inserting it on the front
-David Altmejd | Modern Art
Creepy head sculptures made from crystals, mirrors, fake hair, jewellery etc. 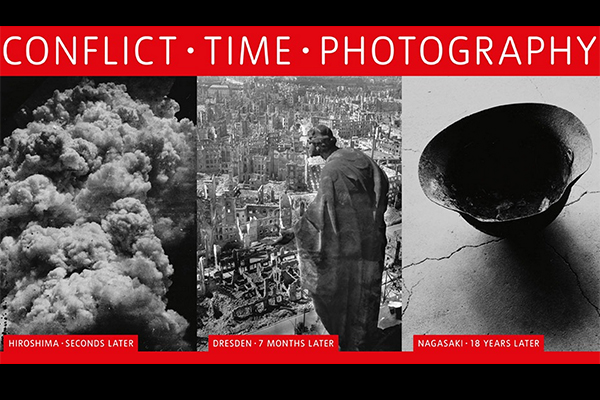 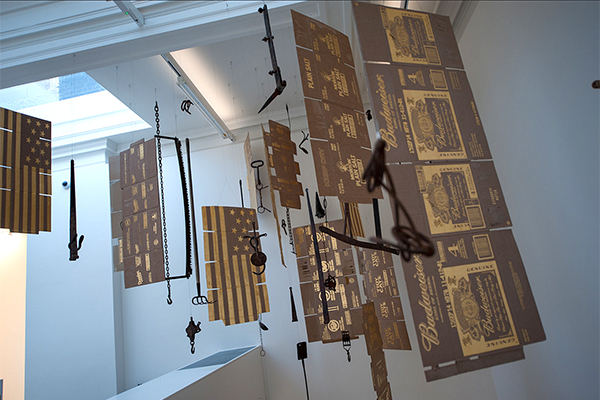 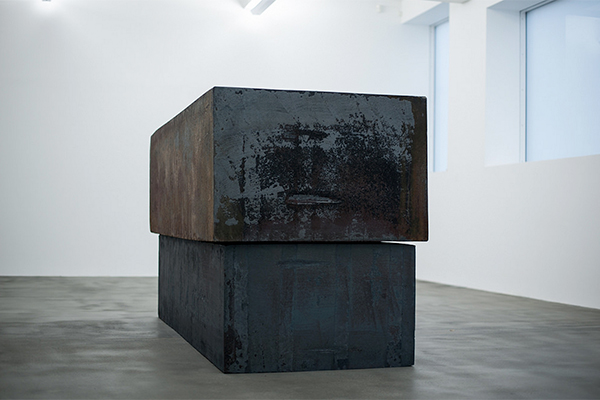 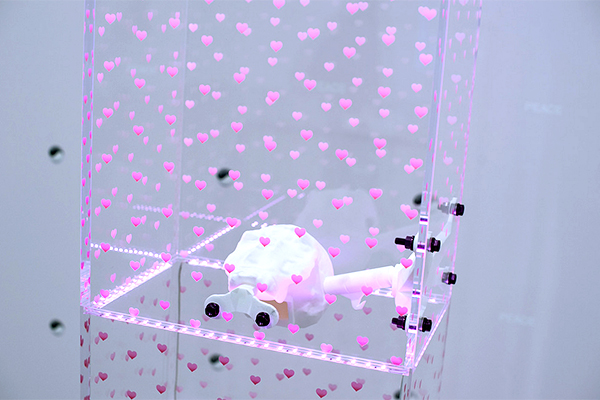 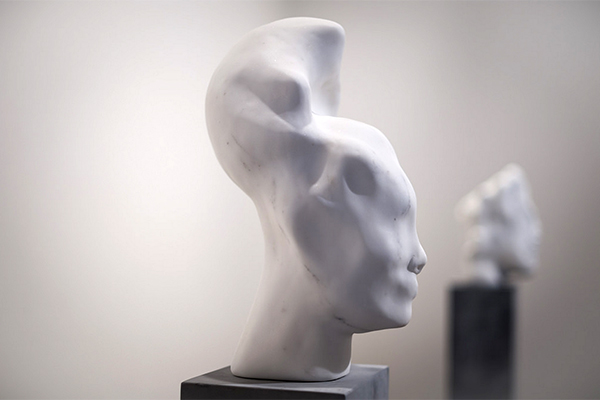 Making Art in Someone Else’s World — Interview with Thomson & Craighead

Thomson and Craighead’s video-, sound- and Internet art explores how technology challenges the way we look at the world. We spent a very enjoyable afternoon with the artists, talking about their key works, the evolution of digital, East London’s art scene and how it has changed during the last 20 years, as well as exchanging experiences about working as a couple, favourite shows, artists and wine bars.

We first saw Jon Thomson and Alison Craighead’s work during their acclaimed solo Never Odd or Even at Carroll/Fletcher in 2013. The artists frequently participate in group shows that blur the lines between art, science and technology. Most recently their work Stutterer was presented at Scales of Life at LifeSpace Science and Art Research gallery in Dundee. A new, exciting exhibition, How to Construct a Time Machine, opens this Thursday at MK Gallery. Also this week, Jon will be a guest speaker at the Digital Utopias conference in Hull and soon you will be able to see their Here roadsign at The Line Sculpture Trail in East London.

Raped and killed in Shoreditch

Jon and Alison witnessed the very beginnings of Shoreditch gentrification, after moving to London in the early 90s. When we ask their recollection from that period, they talk about it with excitement and nostalgia: “We came to London right after our art studies in Dundee. We moved around a lot, but we spent a lot of time in Shoreditch. At first there was just one gallery, ‘The Agency’ on Charlotte Road. I was the gallery assistant,” recalls Alison “and I still remember walking down from Old Street station during winter—it was pitch black without a single streetlight. ‘I might just as well get raped and killed around here’, I thought.”

“96 and ’97 was when the changes started to happen. There was a great energy with plenty of events happening and a real sense of community.” adds Jon. “Joshua Compston, who used to ran the legendary ‘Factual Nonsense‘, also on Charlotte Road, threw ‘A Fete Worse Than Death’ each summer — a big affair frequented by everyone on the art scene and really good fun. I was a sound editor at Lux on Hoxton Square, so I used to be in the area a lot. Couple of blocks further, in Underwood street, you had many artists-run spaces and art collectives: 30 Underwood St, Five Years, Mellow Birds, the BANK art collective, Poo Poo gallery… It was there, at 30 Underwood St gallery, where we had our first solo in ’97. That was a big deal for us.

Borrowing computers by the hour

It was during that period that Jon and Alison created their first digital artworks. Back then, computers were mostly standalone productivity machines and the Internet was something abstract, used predominantly in academic and military circles.

“Before buying our first 7100 Power Mac, we had to rent computer by the hour from a print workshop.” they explain. “Simon Worthington of the Mute magazine taught us HTML and with that knowledge, plus some basics of Flash and Javascript, we could show our works directly online.”

But although working at the frontiers of digital media, the physical and the virtual aspects have always coexisted in their art and they exhibited in galleries and museums as well as online. “We don’t think of ourselves as digital or as new media artists. It’s more about our outlook, about doing something that is part of a certain ecology and that is wider than a strict media-specific approach.”

Their early works such as Altitude, Trooper or Triggerhappy were built in the realm of Internet Explorer 2.0, Netscape Navigator and Shockwave-Flash plug-ins, but because of the rapid evolution of digital technology they aren’t compatible with the current Internet standards. To solve this problem — faced by many pioneers of digital art — Jon and Alison are collaborating with bwFLA from the University of Freiburg to use emulation techniques that enable to view these older works in today’s browsers.

I gave the Internet the thumbs down

“I was in Amsterdam for a show at MonteVideo” recalls Alison her first introduction to the Internet, “and there was a guy who kept talking about something called BBS: ‘People can, like, draw pictures of cows in ASCII code and send them to each other!’ I remember telling Jon — ‘hey, that Internet thing, that’s not gonna take off”.”

So has their work evolved in parallel with the Internet becoming a more mature medium? “I hope not” says Alison “since we feel that the Internet is evolving to a rather dark space. In the 90s the Internet was mostly about commerce and we made our dot-store project as an artistic response to the burst of the first dot-com bubble. Today it has become a space of surveillance. That said, we are of course still interested in where it will lead and we follow phenomena such as cryptocurrency or the Deep Web with enthusiasm.”

We are also curious about how they deal with the political dimension of the Internet. “Our work has no direct political message but it is political and sociological” argues Jon. “We live in a political space, so there’s no way to escape it. Sometimes it is more explicit, as with ‘October‘, a documentary artwork we made about the Occupy movement. Other times the politics just seep in, as was the case with our karaoke videos (‘More Songs of Innocence and of Experience‘ takes spam emails as lyrics on romantic karaoke songs, ed.) that tell a universal story about money, war, death and global politics. At the end of the day we use rather common artistic construct of amplifying and dramatising the topic which we want to highlight.”

“We are very attached to making.” Jon says. “Although many of our artworks are instructional, we enjoy producing them ourselves. We can’t quite shake it – having had the traditional background in painting and drawing, the creative process and the evolution of the concept during this process is important for us.”

“A good example is ‘Stutterer‘, our latest piece.” continues Alison. “We took the first human genome sequence which took scientists 13 years (from 1990 to 2003, ed.) to decipher and used it as a score to select video clips from TV broadcasts from that same period. The result is the A, C, T, and G letters of the DNA triggering a kind of poetry cloud of broadcast footage of that time. The materiality of working with that video was really intense. We needed to evolve the work conceptually and solve all software issues at the same time, within a tight deadline. What we learned is that we like to have a longer development phase, during which we can test and experiment with the medium in order to reach an optimal result.”

That process is similar to how software is written or how start-ups build products, beginning with an idea, building a minimal viable product to prove that the concept works and then scaling it into a sustainable product. It is interesting how the commercial and the artistic processes start aligning.

“There are indeed parallels.” Jon agrees. “Software is quite tyrannical. We have to go step by step to get our concept to a point where we like it. Then we have to build it and hope that it also works. With ‘Stutterer’ we had to make the work twice. The first time there was a memory leak in the VLC player, which only came out during the testing phase. So it had to be coded again and in a different way. We then worked together with a professional coder —Matt Jarvis—who could do in two weeks what would have otherwise taken us ages.

Mostly we function on a need-to-know basis. Being Jack-of-all-trades, master of none, is a good approach in this ever-changing environment. You don’t get hanged up on what you know, you evolve and adapt.”

We’ve got one couple in the gallery, we don’t need another one.

Finally we touch on a subject whom, when working together as a couple, probably none of us escapes: the nature of artistic collaboration. So how does it work on a daily basis within the Thomson & Craighead duo? “Oh, I do all the work” retorts Alison. “In fact I’ve been carrying him for 20 years, he does nothing. But you know, he’s quite easy on the eye.”

Jon Thomson (1969) and Alison Craighead (1971) studied at Duncan of Jordanstone College of Art in Dundee. Jon now lectures part time at The Slade School of Fine Art, University College London, while Alison is a senior researcher at University of Westminster and lectures in Fine Art at Goldsmiths University. Recent solo exhibitions include Maps DNA and Spam at Dundee Contemporary Arts, Not even the sky at MEWO Kunsthalle, Memmingen and Never odd or even at Carroll/Fletcher Gallery, London. Group exhibitions include The Nam June Paik Award at Kunstmuseum Bochum, Germany, Global Activism at Zentrum Kunst Media, Karlsruhe, Video Dumbo at Eyebeam, New York and The Jarman Award at Whitechapel Gallery, London. They are represented by Carroll/Fletcher gallery. They live and work in London and Dundee.

Elastic Minds is a series of interviews about creative people working at the intersection of various disciplines. 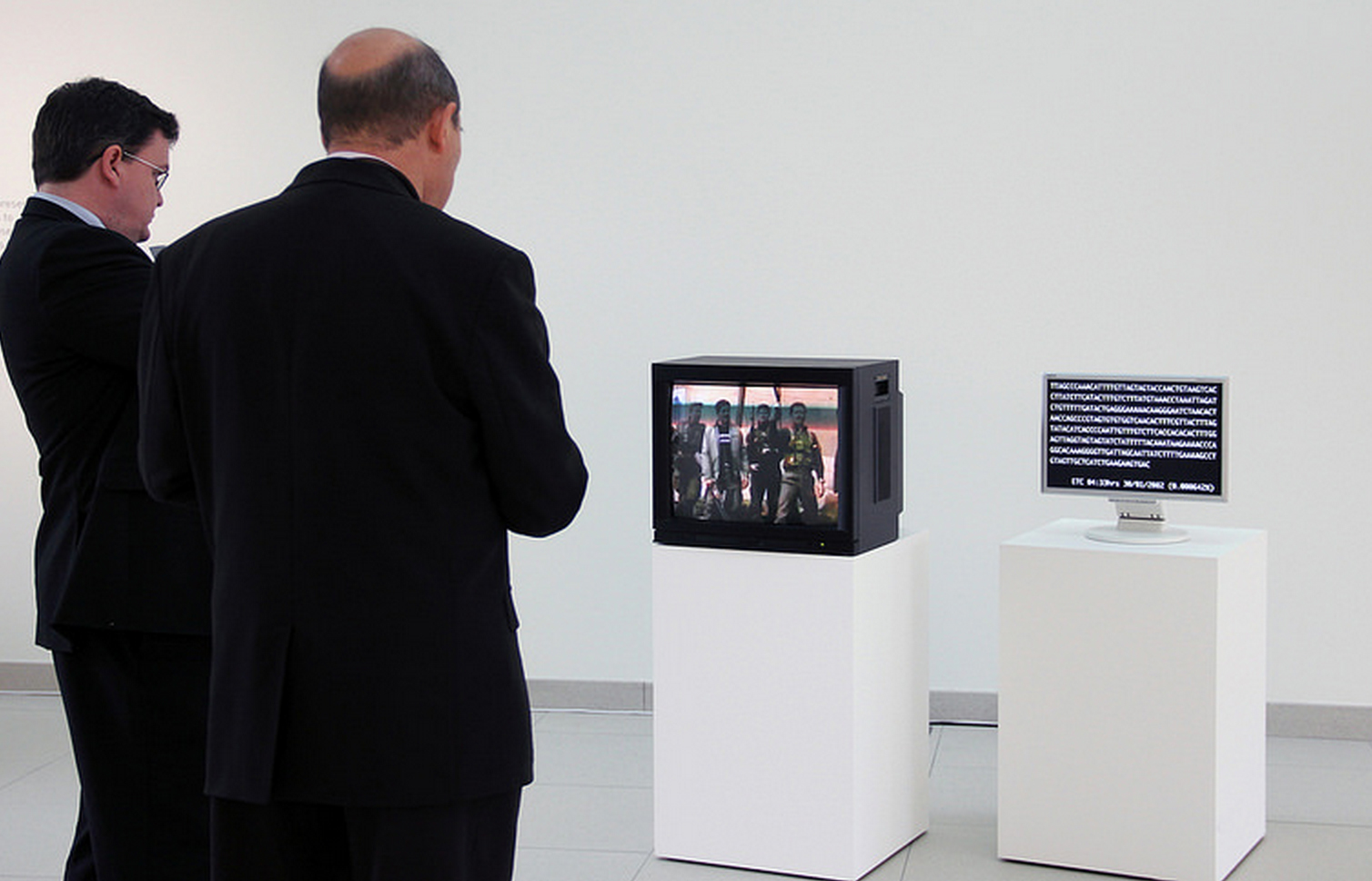 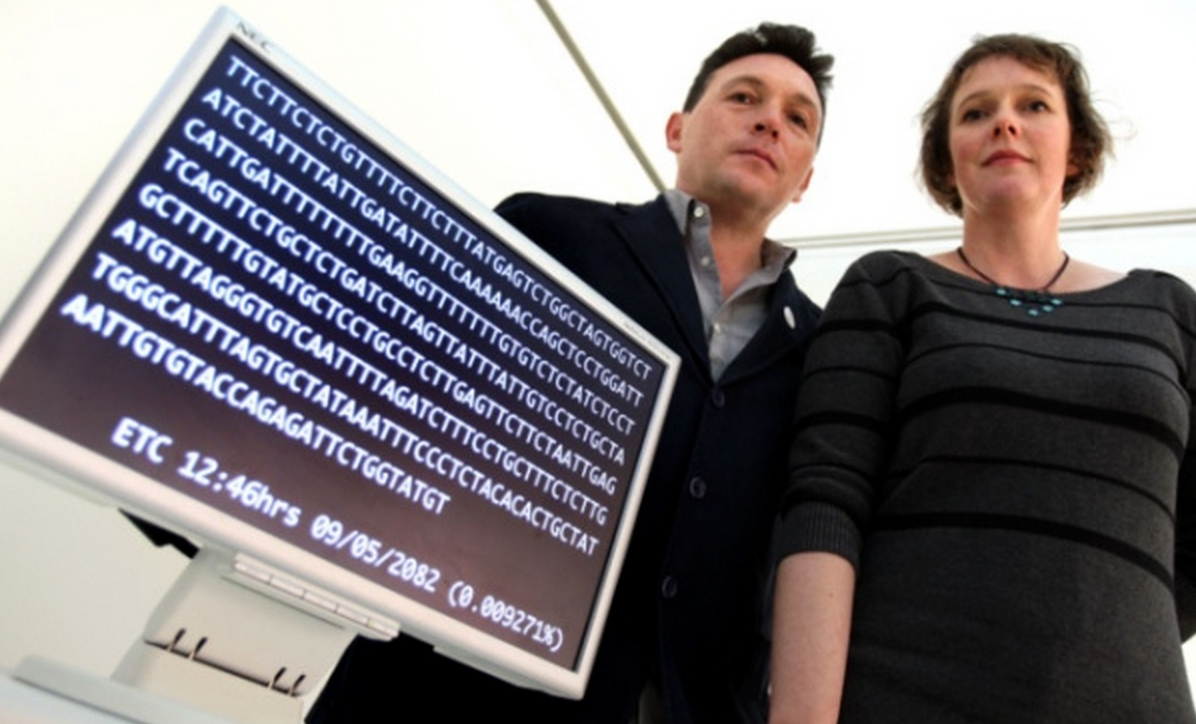 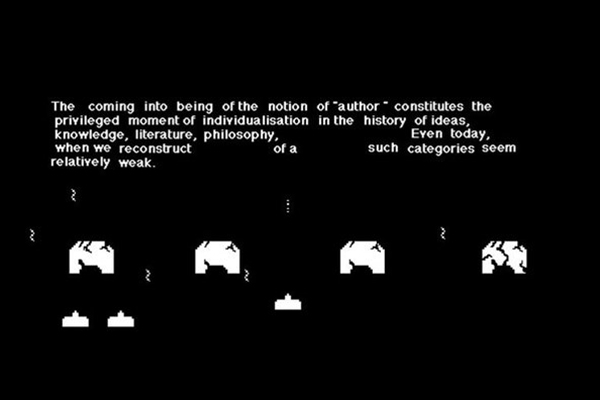 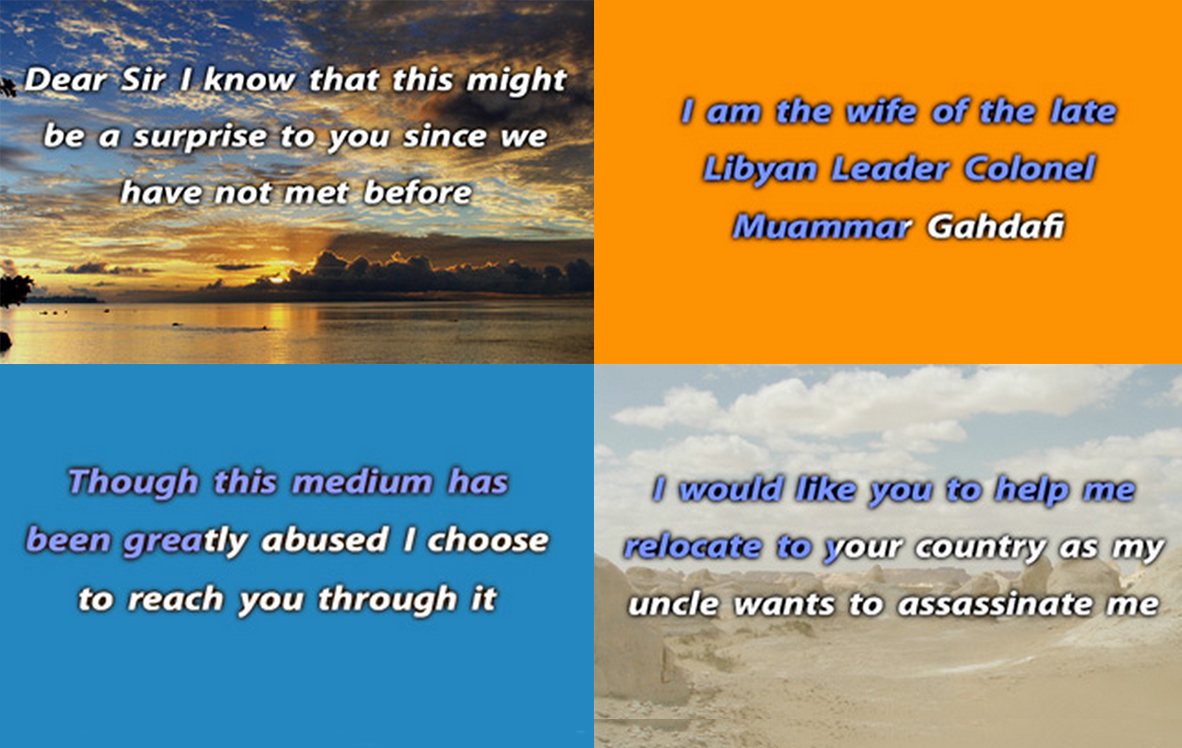 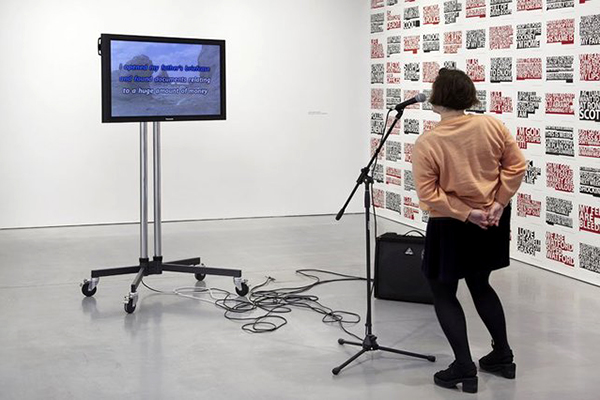 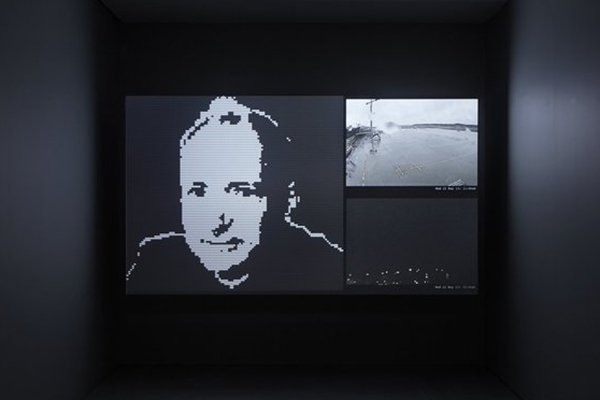 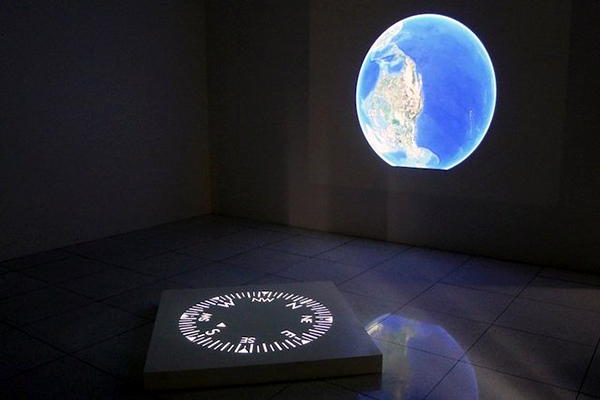 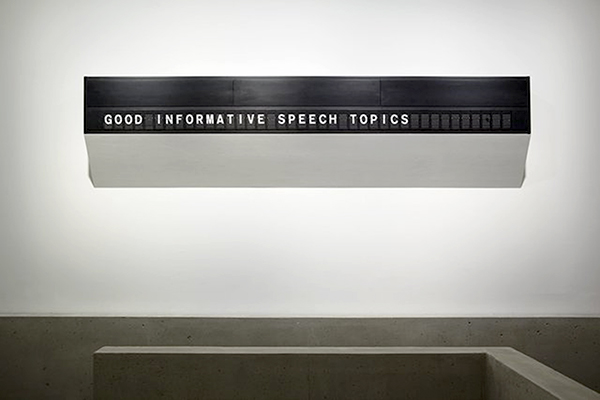 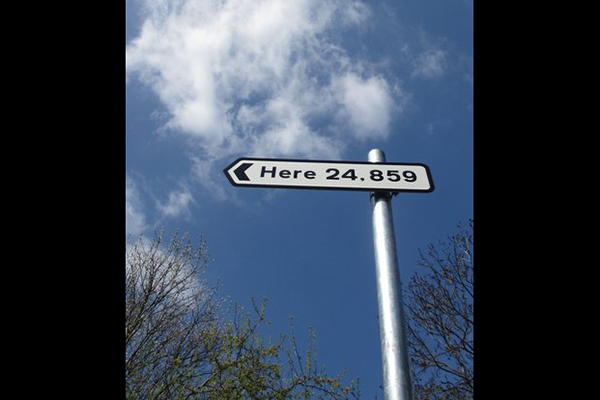 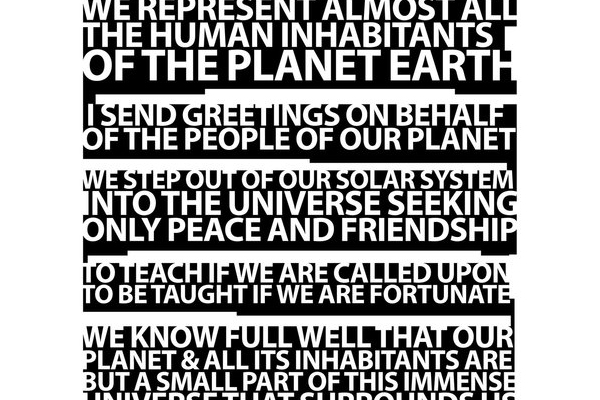 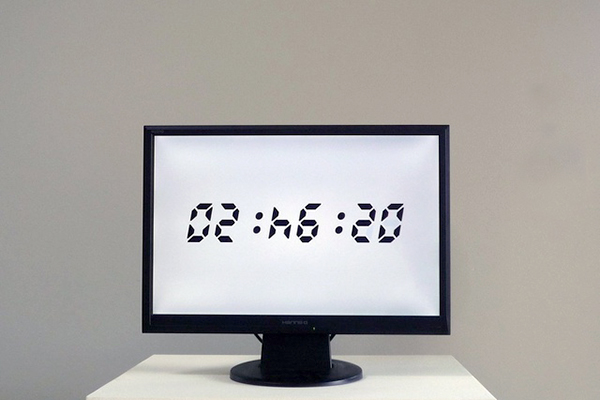