Urbi et Orbi from Shoreditch – The Pope vs Banksy

Discovered on this cold but sunny Easter morning in Shoreditch: the Pope by Banksy or in a Banksy’s style (who can be sure of these things nowadays anyway).
What’s more remarkable is that Vatican was the first to spot this new piece and included a witty retort in today’s Pope Francis’ “Urbi et Orbi” address, denouncing ‘greed looking for easy gain‘. Eat this, spray-can Philistines! 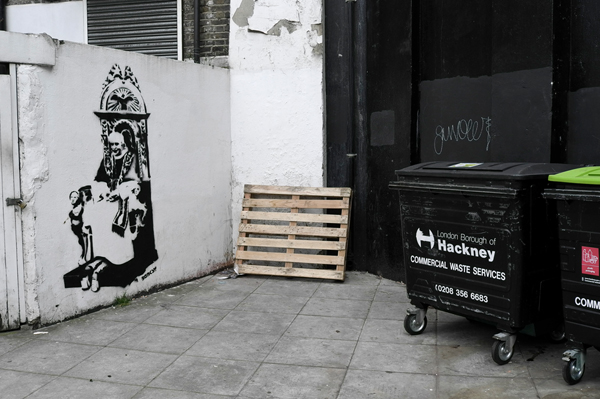 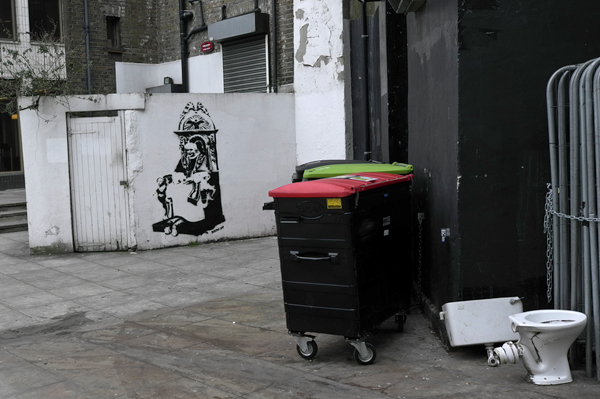 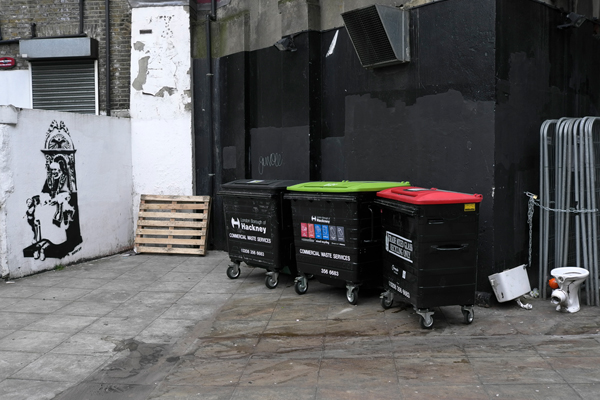 While reading this interesting article about a new breed of art patrons from Silicon Valley, we discovered Bay Lights, a public artwork created for the San Francisco Bay Bridge by Leo Villareal. The “master of light” Villareal created a stunning computer-programmed show, which uses 25 000 LED lights forming various moving patterns
across the bridge. The world’s largest light sculpture first lit up on March 5th and is now running every night, from dusk till 2am, for a period of two years.

The artist said: “This was a whole I.T. job, which you wouldn’t associate with a monumental piece of public art.” We can see his point and totally get the appeal such work must have have for the Silicon Valley techies.

Even if you don’t make it to SF till 2015, you can watch the nightly live stream on a long distance. In case you live in New York, you can see another of Villareal’s latest light installations (titled Hive) at Bleecker Street subway station. And if you’re in London, Leo Villareal is one of the artists currently showing in the brilliant Light Show at Hayward Gallery.

Opening tomorrow is Souzou, an exhibition of Japanese outsider artists at the Wellcome Collection in London (photos from the media view are here). “Souzou”
has two meanings in Japanese: depending on how it’s written it can stand either
for creation or for imagination. “Outsider Art”, on the other hand, is a term coined in 1972 by Roger Cardinal for raw art (art brut), assigned to creative expressions uncontaminated by culture or made by autodidacts.  In this case it refers to works of 46 contemporary Japanese artists/patients diagnosed with various cognitive,
behavioral and development disorders and residing in special care institutions.
Their work can be a part of their therapy, an expression of their feelings and desires, or a result of their obsessions. Their work is non-commercial and financially they
are dependent on social welfare.

Perhaps not a theme that everyone immediately feels drawn to, but the exhibition is definitely worth seeing and the works are surprisingly fresh, beautifully crafted and very poetic. If this still doesn’t persuade you to make the trip, this might: the outsider art category – and more broadly craft and making –  is becoming increasingly researched and exhibited. Another exhibition of self-taught artists opens this summer at Hayward and even the upcoming Venice Biennale will see a selection of work by outsider artists as part of the International Pavilion show “The Encyclopaedic Palace”. One of the artists selected for the Biennale is 31 years old Shinichi Sawada, diagnosed with autism, whose spiked sea monsters and demons are also shown here at Wellcome.

To follow the advise of Shamita Sharmacharja, the curator of the exhibition, we let the artworks speaks for themselves – just look at the photos and enjoy. These were amongst our favourites:

Ryosuke Otsuji‘s interpretation of the domestic Okinawan lion sculptures; Shoichi Koga‘s brilliant newspaper-sculpted fantasy figures; Takahiro Shimoda‘s pyjamas painted with images of her favorite food; Takako Shibata‘s ever-expanding portrait of her absent mother; or Shota Katsube‘s minuscule action figures army. One of the most amazing works is made by the youngest artist from the show, the 17 years old Norimitsu Kobuko. Shown as “work in progress”, it depicts a map of the world made entirely from the artist’s imagination and internet search. When completed, it will be 10 metres long.

Thematically, the exhibition is divided into 6 overlapping sections: Language, which deals with the difficulty of verbal communication; Making, showing the love of material and therapeutic aspects of creativity; Representation and Relationships deal with people and objects surrounding the artists; Culture questions the concept of outsider art being a result of pure interior thoughts; and Possibility presents artistic endeavors to restructure the surrounding world. The exhibition closes with a room of films, where you can contemplate the meaning and the context of what you’ve experienced. 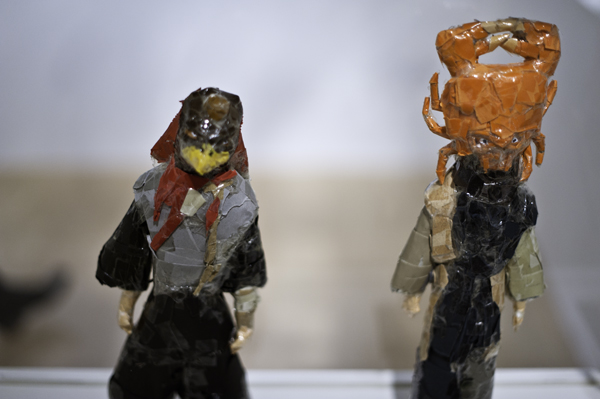 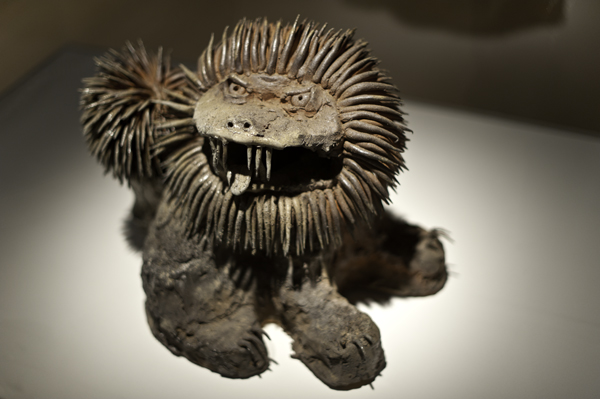 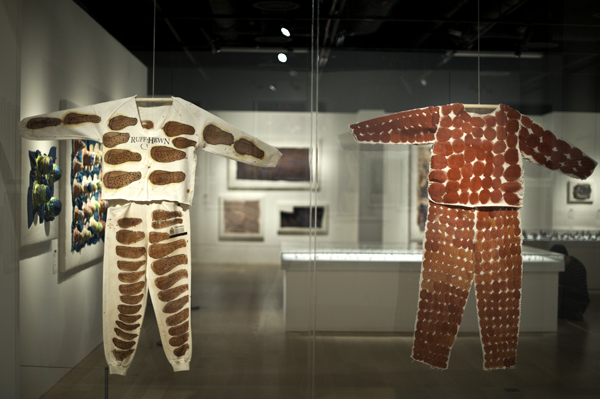 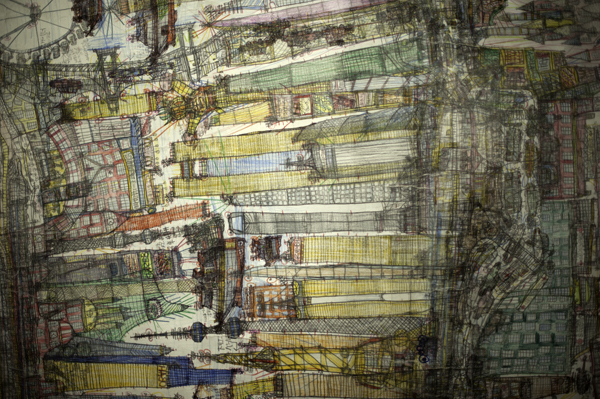 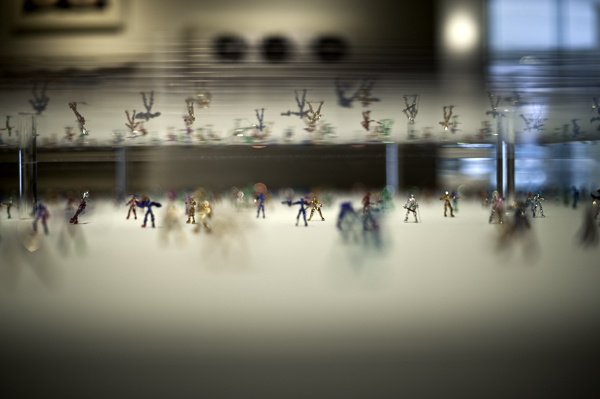 We made a short selection of recently published art and architecture books,
which we found pretty amazing. They are, in no particular order:
/
Hauser & Wirth 20 years
Published by Hantje Cantz and just out in stores, this impressive looking hardcover has been brought out to celebrate the 20th anniversary of Hauser & Wirth gallery.
Its 1050 pages are almost entirely filled by beautiful full-page photographs of the gallery’s artists and their work. The names speak for themselves: Louise Bourgeois, Berlinde De Bruyckere, Paul Mc Carthy, Matthew Day Jackson, Andy Hope 1930, Thomas Hauseago, David Claerbout, Isa Genzken etc. The last 100 pages follow chronologically the gallery’s history, from its first public space in Zürich in 1992, through a shared gallery with David Zwirner on East 69th Street in NY (from 2000 until 2009), till the present day. At the moment the gallery has 5 permanent exhibition spaces: 2 in London (Picadilly, opened in 2003 and Savile Row, in 2010), 2 on Manhattan (at the former Zwirner & Wirth space on East 69th Street; the second has just opened on the 18th Street next to the Highline) and 1 in Zürich (at the Lövenbräu art complex, which has reopened in June last year). The gallery is run by Swiss-born and London-based dealer Iwan Wirth, together with his wife Manuela and his mother-in-law Ursula Hauser. And it’s definitely one of our favorite galleries in London!
/
Commissioning Contemporary Art
The full title is “Commissioning Contemporary Art, A Handbook for Curators, Collectors and Artists” – and if you’re one of these, or just an art lover, you should read it! Written by Louisa Buck (art critic, author of several books and writer for the Art Newspaper) together with Daniel McClean (lawyer specialized in art, cultural and intellectual property law as well as independent curator and writer), it sheds light on the intricate practice of art commissioning from its various angles, discussing the perspectives of artists and patrons, describing the actual process with its pros and contras and the aftermath (what happens with the commissioned work once its created & handed over). The book offers lot of important advise from the legal and practical points of view, as well as giving you a taste of what it’s like to commission a piece. It also serves as a great guide to important public and private art projects of the last years. Plus it’s an exciting read! Highly recommended. The book was published in 2012 by Thames & Hudson. (Might also be of interest: “Art as an Experience” by John Dewey; it’s on our bookshelf, but we haven’t cracked it yet.)
/
The Art Prophets
Couple of years ago we read the very amusing “I Sold Andy Warhol (too soon)” by American art adviser/dealer/author Richard Polsky, so when we heard that his new book “The Art Prophets: the Artists, Dealers and Tastemakers Who Shook the Art World” is out (published by Other Press in 2011), we dived in immediately. Same as “I Sold Andy Warhol”, it is a page-turner which you read in one day while at the same time absorbing plenty of valuable information. In 10 chapters, Polsky tells stories of 11 art visionaries thanks to whom new art categories were created or brought out of obscurity. The fact that he knew/knows all of them personally makes it even more compelling and engaging read. The 11 personalities and movements discussed are: Ivan Karp and Pop Art; Stan Lee and Comic Book Art; Chet Helms, Bill Graham, and the Art of the Poster; John Ollman and Outsider Art; Joshua Baer and Native American Art; Virginia Dwan and Earthworks; Tod Volpe and Contemporary Ceramic Sculpture; Jeffrey Fraenkel and Photography; Louis Meisel and Photorealism, and Tony Shafrazi and Street Art.
/
Modernism London Style
Another splendidly-looking hardback, “Modernism London Style: The Art Deco Heritage” was published in January this year by Hirmer Verlag in English & German. Edited by architectural historian Christoph Rauhut, with essays by Adam Caruso and beautiful black & white photography by Niels Lehmann, it portrays the architectural art deco heritage of London through 230 buildings, amongst others the Simmonds Aerocessories Factory, St Olave House,  Saville Theatre, The White House Hotel or Royal Institute of British Architects. We only found out about this book yesterday through The Modern House blog, so we haven’t read it yet, but first impression says “awesome”. And it comes with a detailed register of buildings and maps, so we are already planning our own modernist architecture weekend tour – when the weather gets bearable, that is. 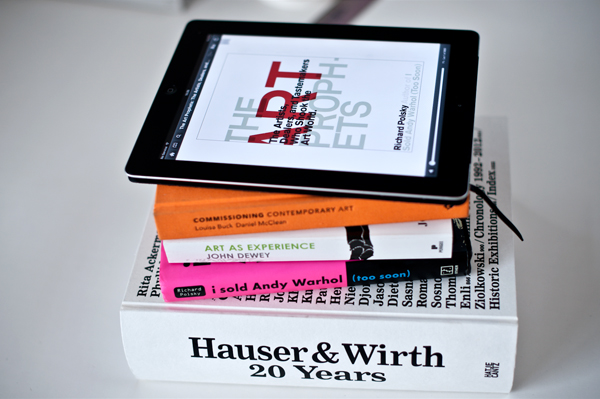 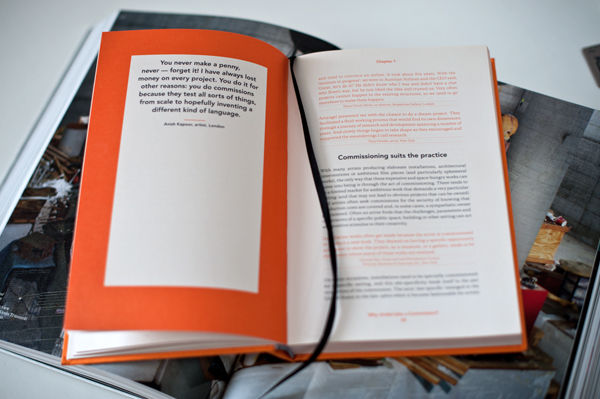 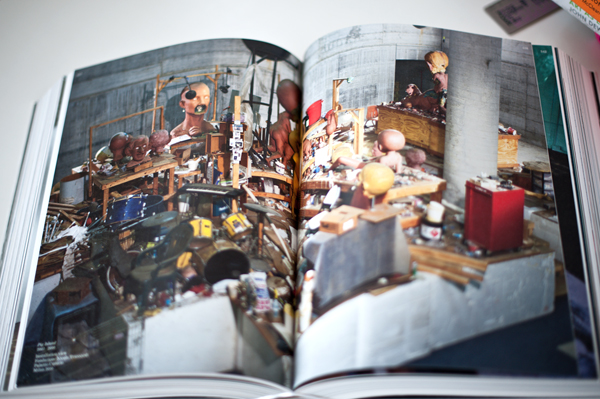 Last night we attended the opening of Sterling Ruby‘s debut show EXHM (stands for “exhumation) at Hauser & Wirth gallery Savile Row, London. The completely packed exhibition was truly amazing: monumental, fresh, with a dark sense of humor and into-your-face. Ruby presents pieces in various media: his signature shiny, dripping urethane sculptures; bleached canvases with torn rugs glued on them; impressive cardboard collages made out of various residues from the artist’s studio; series of fabric installations; and large-scale ceramic sculptures titled “Basin Technology”.
(You can read in detail about the exhibited works in the gallery’s press release).

Here are some snapshots from the opening – but we’ll be back for more.

The artist’s background and influence is as intriguing as his work: Ruby was born on an American military base in Germany to a Dutch mother and an American father and family relocated to the US shortly after his birth. After attending high school, he worked in construction, was a professional skateboarder and played in several punk bands. He eventually went on to study art, first at the unaccredited Pennsylvania School of Art and Design, followed by BFA at the School of the Art Institute of Chicago and MFA at Art Center College of Design in Pasadena, California (where he was a teaching assistant to Mike Kelley). He now lives in LA.

Ruby practice spans various media from sculpture, painting, drawing, collage, ceramics to photography, video and performance. His works are rough and “dirty” (the fabric sculptures at Hauser & Wirth look like they’ve been stepped on numerous times – incl. during the opening), commenting on subject of social pressure, conflicts between the individual and the society, American domination and decline etc.

We’ve seen Ruby’s work couple of years ago at Xavier Hufkens in Brussels and loved it (wish we bough something that time :-/). Now his career explodes, with exhibitions all over the world: apart from London, he has shows planned at the new beautiful Kukje Gallery pavilion in Korea, at MACRO Rome, and – our Belgian followers will be pleased – starting in October at Dhondt-Dhaenens in Deurle. 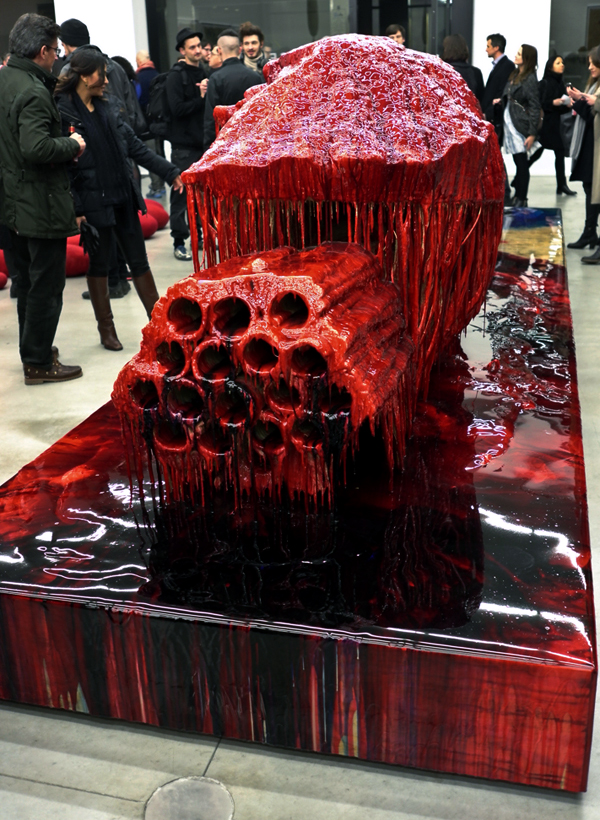 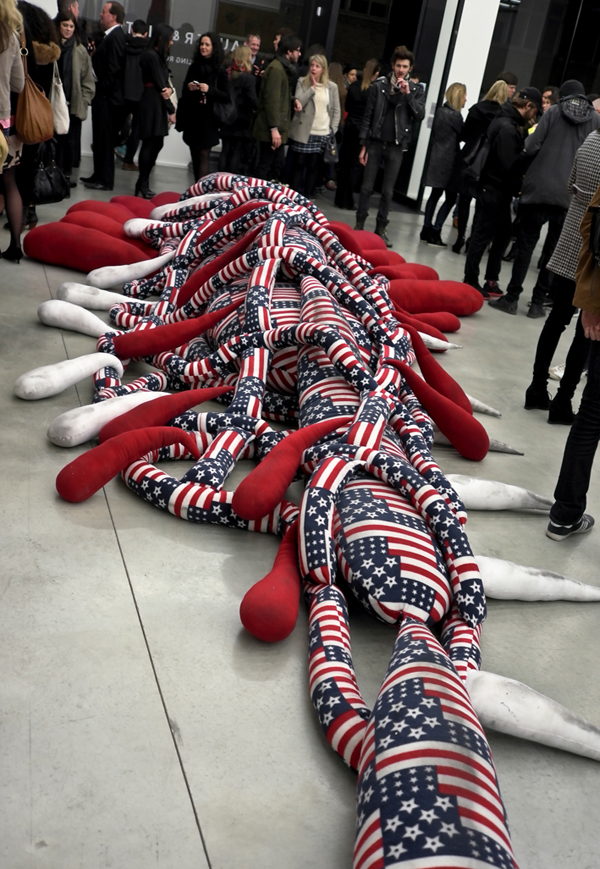 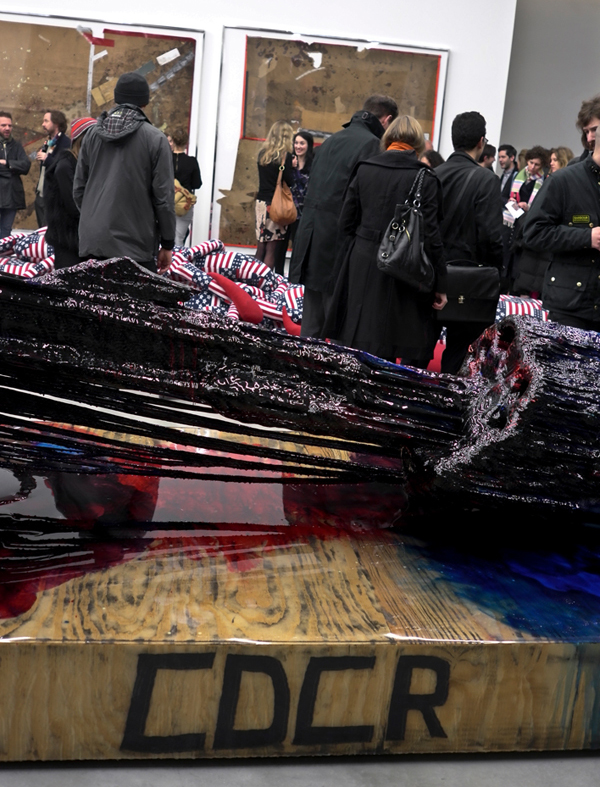 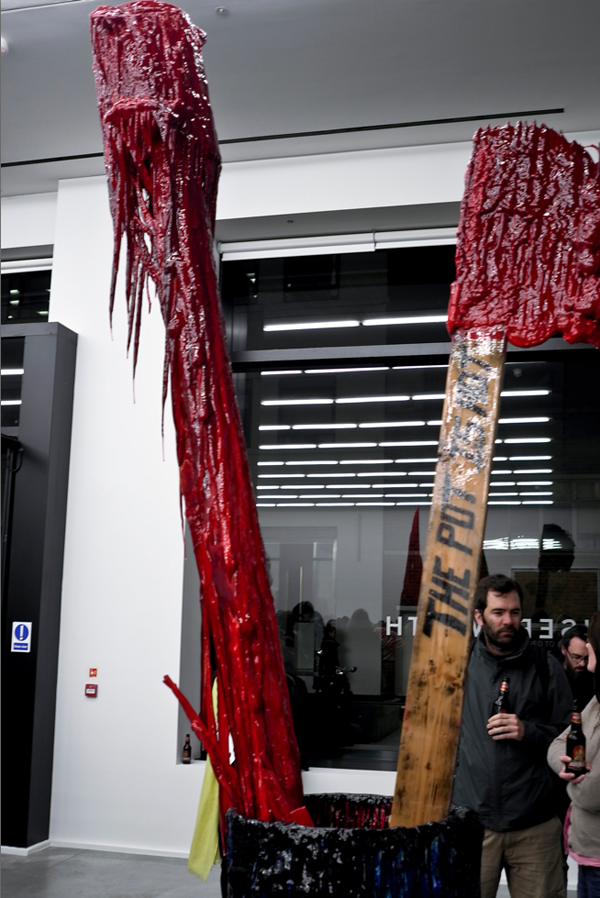 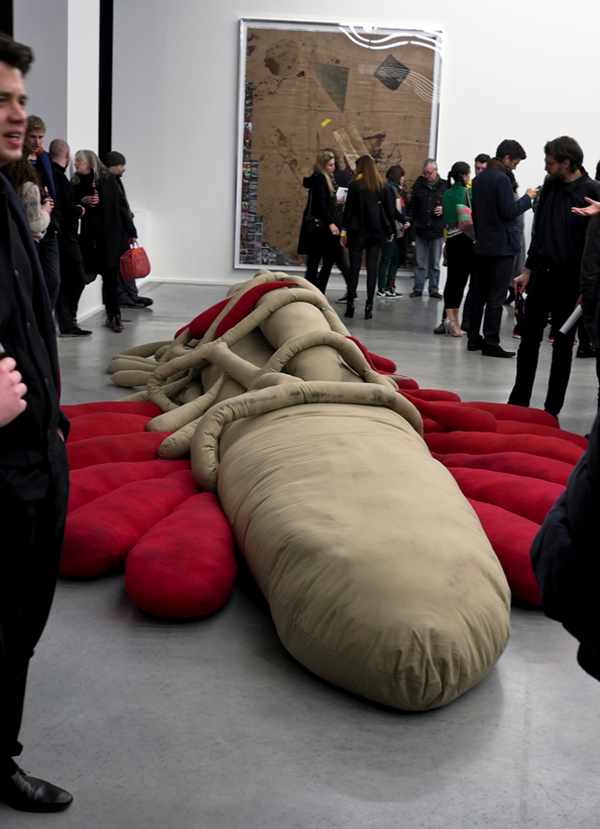 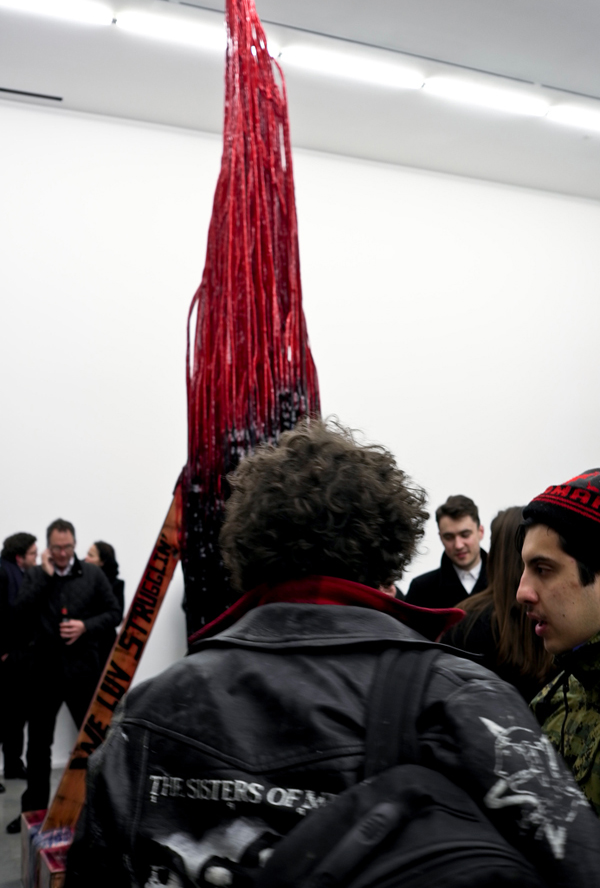 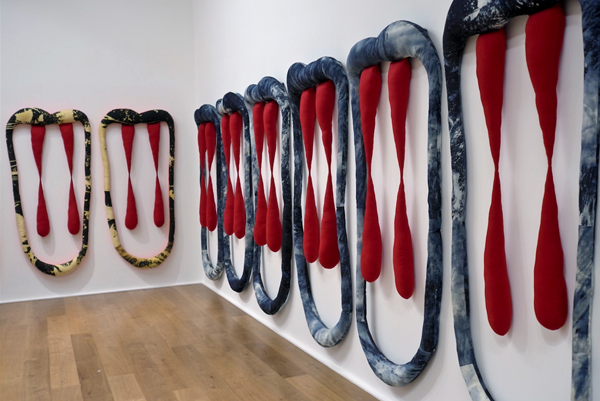 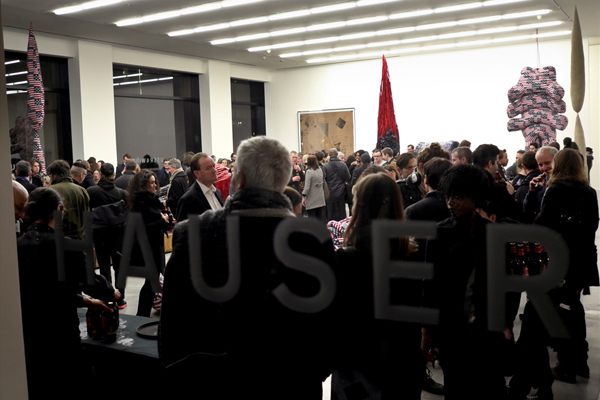