Punch to the Sky: an interview with Marcin Dudek

Marcin Dudek‘s Punch to the Sky is at the moment on display at Edel Assanti. We went to the opening and loved the spirit of the self-stiched burnt flags, plaster-, tape- and cardboard collages and the steel–frame sculptures. The gallery was full, the atmosphere lively and Marcin’s performance literally fuse–blowing. We were curious about the ideas behind the works and sent Marcin couple of questions  >

Hi Marcin! Could you tell us more about the designs of the flags you’ve made? Do they refer to something concrete or are they completely abstract?

They are abstract and intuitive, pieces of reconstructed fragments from my memory. The lines and blocks of colors represent simple division that you can find on many national emblems. I like the way in which geometry penetrates our everyday perception, from territorial maps to flags displayed around a stadium, it’s an inescapable part of culture. We all carry sparks linked to these symbolic compositions with us, and sometimes these harmless flames escalate into large fires.

During your performance Exercises in the Air you destroyed a construction made from a metal fence. What did you want to say with it – was it about the act of destruction or about expressing the physical dimension of your work?

I cut through steel and concrete in order to manifest the physical dimension of these sculptural materials. I feel that the act of making a sculpture becomes less and less physical these days, as the digital format slowly takes over. Sculpting with a 3D printer – yes why not! But I prefer to use a grinder to change or to destroy the objects’ appearance. Not as an attack against progress, but as an attempt to find a balance in the stream of our digi-enthusiastic era. On that note, I’m also a big fan of the stone crusade virtuously conducted by Jimmie Durham.

We read in the press release that you used to be a fanatic football supporter. Is the burning of the flags a nostalgia act for the real action?

I was never particularly fanatic about a flying piece of leather, but I do like the atmosphere of a football game and I tend to consider hooliganism as a vital form of independent movement. During the 90s, there was an explosion of football fan subculture in Poland, with an active club in every city. Krakow, where I come from, is particular active on that front and the presence of two major football teams electrifies the divided town. On the day of the Derby you can smell the adrenaline in the air. Preparation for this day is a year-long activity and supporters compete by collecting the scarves and flags of the opponents. The violence culminates during the Derby by burning the claimed trophy in front of the enemy as they watch from the other side of the stadium. The act of burning is symbolic, but the amount of collected scarves triggers an archive of frenzy. Out of the ashes, the drama moves into future season already spiced up with the hunger for revenge.

We love your collages. You’ve been making them already for several years. Do you see them as individual works reflecting a certain moment or is there a ongoing story that you want to tell through them?

I’ve been making collages since 2006 and they are an important part of my work, but I think of them as being the contra–revolutionary force, usually coming back after the outbreak of something new in my art practice. However, the works on cardboard are continuously evolving in close conversation with my other works. Over the past 7 years they’ve included subterranean maps, thoughts about the underground – ranging from labor (mines) through culture (movements) to dark histories like the bungalow of Josef Fritzl – or now the scarves sewn together as trophies. The collages are like boats floating on a constant shift of direction in my work.

Marcin Dudek (*1979 in Krakow, Poland) is represented by Harlan B. Levey Projects in Brussels. Current shows incl. A Land of Space and Optimisms at Galerie Marion de Canniere in Antwerp and Cathedral of Human Labour, the first phase of a permanent underground sculpture for Verbeke Foundation, Kemzeke.

Punch to the Sky runs @ Edel Assanti till Dec 19. Don’t miss it! 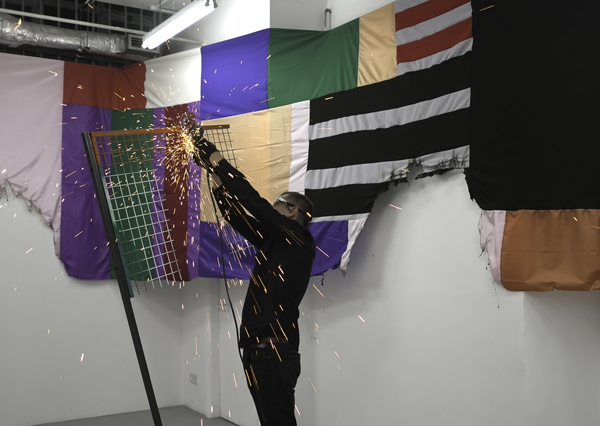 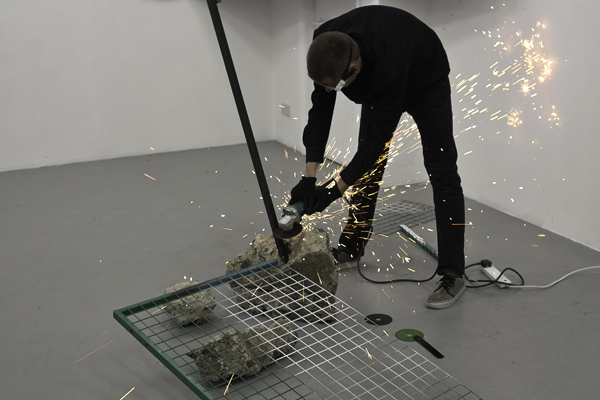 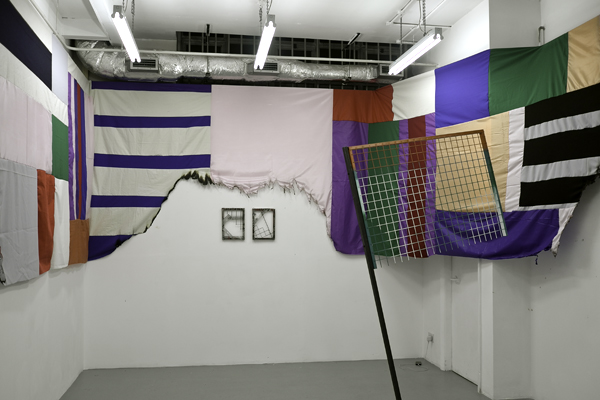 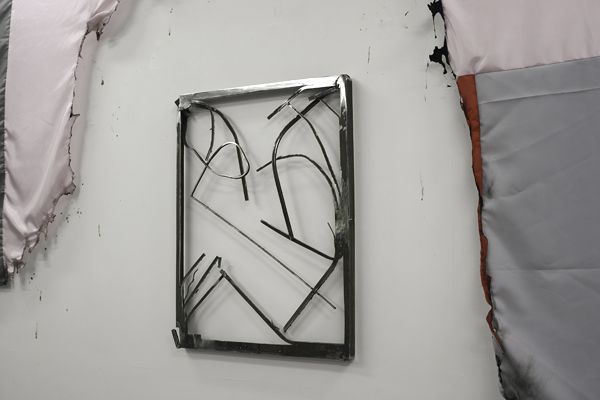 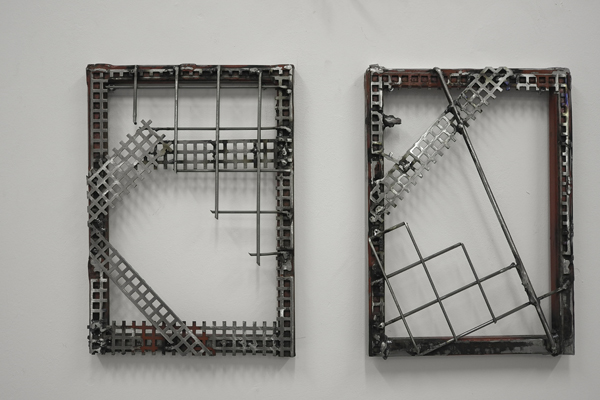 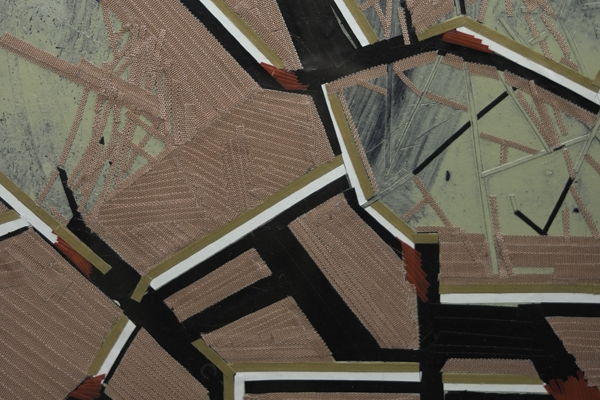 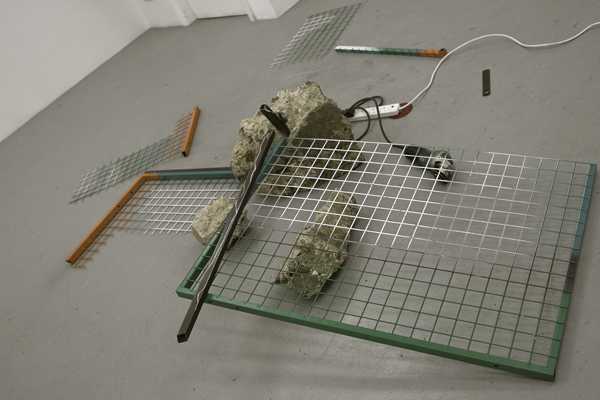 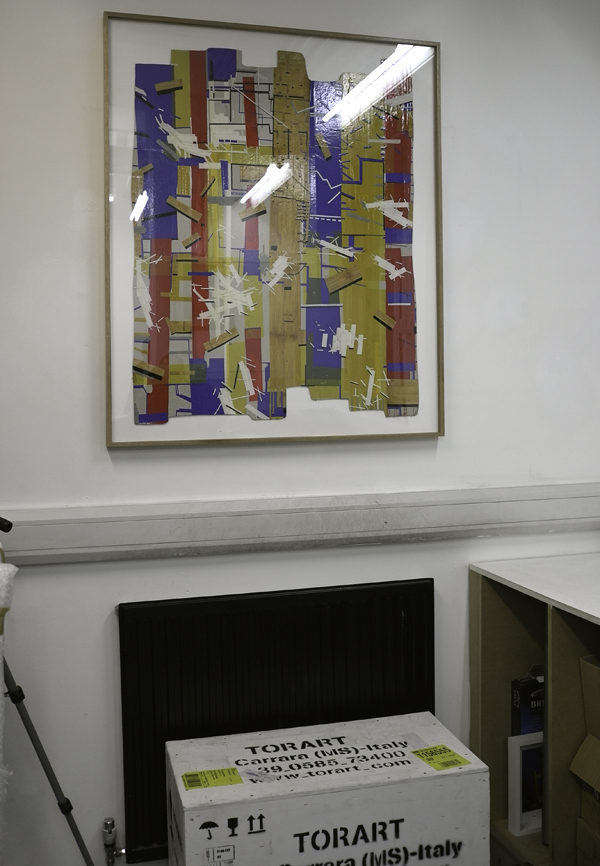