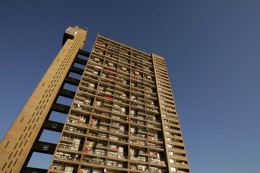 LONDON – NOVEMBER 21: The sun shines on Trellick Tower on November 21, 2006 in London, England. The building contains 217 flats and was originally entirely owned by the Greater London Council with the flats rented as council flats. Most of the flats are still social housing. According to a report by The Rowntree Foundation, council estates in Britain still require further government funding to ensure residents are not disadvantaged. The report found that although patterns in employment and education improved in council estates, the levels of economic inactivity have increased and long-term government commitment is still needed to ensure estate residents are not disadvantaged by where they live. (Photo by Scott Barbour/Getty Images)