Old man in need of a haircut 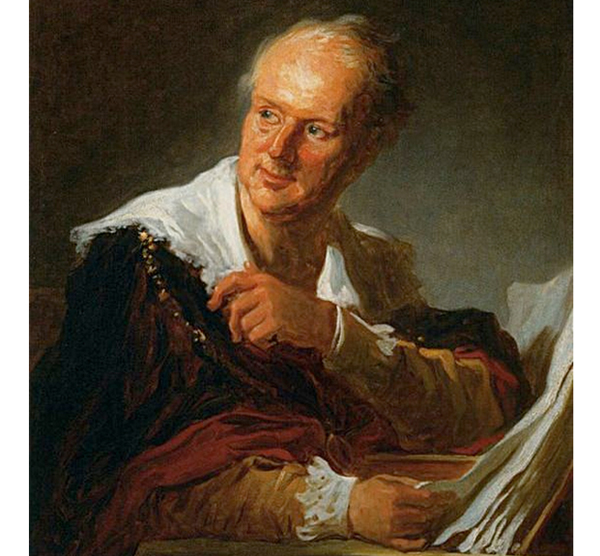 The lively portrait attached to this post, by the ever-delightful Jean-Honoré Fragonard (no connection with the perfume house, thank you for asking) was long believed to depict famed French philosopher Denis Diderot. Its resemblance to a well-known and properly documented portrait by van Loo (another wiz with a brush), the rich symbolism attached to the voluptuous book, the confident gaze and the shining light seemed to provide a sound basis for the original attribution that, standing for years, has helped burn this image into the collective subconscious — and onto the pages of countless reference books.

Non ! say experts at the Louvre, who now posit this is the mere depiction of an « imaginary figure », an allegory of enlightened mankind. Irrefutable clues are said to hide in plain sight, raising terrifying questions. The Art world, in fact, is shaking and quivering on its jellied foundations. Why are this man’s eyes blue and not brown? Could Diderot’s face have turned from what van Loo’s saw to the hideous mask now revealed by Fragonard? Could this man be a bona-fide doppelgänger of the trusted philosopher? Or could the differences between the two images be attributed to variations in style, technique and sensitivity to the academic ideal? Short of an alien abduction theory, apparently not en vogue in artistic circles, every opinion and hunch, founded or not, is being aired on the bulletin boards and mailing lists upon which the bedrock of scientific knowledge lies.

Frankly, we are unable to muster much excitement for the Louvre’s tantalising revelations. Their arguments, while perfectly reasonable, are a bit too tenuous for our tastes, and the publicity this hullaballoo is bringing to their upcoming opening of a mini-Louvre in Lens, France (a city in need of publicity if there ever was one) seems a little too convenient to be ignored entirely.

More to the point, who cares? Matching sitters with their portraits is an interesting, enlightening exercise that no doubt contributes to the knowledge and understanding of Art. It could also be argued that this portrait, as a national icon, deserves to be analysed and understood. Nevertheless, the identity of the mysterious stranger is irrelevant to the style, balance and elegance of the picture. Now that it has lost its brand name, its celebrity backing, this work is doomed to oblivion, and today’s headlines grab, which it neither deserved nor asked for, is the crest heralding a long and slow descent into the storage basement. That, my friends, is the real tragedy.