Couple of weeks ago we went to see Robots and Avatars, a group exhibition organized by the London-based body>data>space and showcasing works that oscillate on the border between art and science. And we met and talked with Tobias Klein, whose exhibited piece Soft Immortality immediately caught our interest.

Tobias has studied architecture and runs a small studio in Hackney, north part of London. In parallel with his architectural practice, he experiments with various technologies and processes, from 3-D and MRI* scans to crystal growing, using these methods to create art installations with a poetic narrative.

HFA: So how does an architect end up making these complex installations?

TK: I guess partially it had to do with my family background. I grew up in an environment where pushing barriers was embraced and encouraged. So to “build straight walls”, in the classical modernist sense, somehow didn’t seem enough.
I wanted to take the reality one step further. After a couple of years in Aachen I decided to continue my studies at the University of Applied Arts in Vienna where I concentrated on so-called speculative architecture. It’s an approach that looks at architecture in an experimental, non-functional way. From there on, it was a gradual shift to the current multidisciplinary practice, first at the Bartlett School of Architecture and later on in my own studio.

I think studying architecture is a good starting point for an artist. It provides you with rich pool of knowledge concerning materials and resources and teaches you to think as an organizer: someone with a clear vision, who nevertheless needs a network of people to bring his ideas to life. It definitely prepares you very well for not becoming an architect. (laughs)

HFA: The human body plays an important role in your work. Where does your interest in the human body, and especially in the inside of it, come from?

TK: Six years ago I came across a drawing from the scientific anthology Ma’aseh Tuviyyah by Tobias Cohn. It compared human body to a house in the function of its parts and organs: the eyes were the windows, the heart a master chamber, the stomach a kitchen etc. The book dates from 1707 and it was the first time someone made such a comparison between a body and architecture, while focusing on the inside. I see a parallel with my way of approaching formal issues: contrary to dealing with external volumes and space, I am interested in the process of embodiment.
What is inside our body and how can we represent it in a fascinating way.

The Soft Immortality sculptures are good examples. They are reconstructions of the inner parts of my body, based on voxel** datasets acquired from MRI scans, and further altered. By focusing on the densities within the body, rather than on its surfaces, I wanted to introduce a new type of body-space relation, which is in a state of constant change with variable concentrations of mass and matter.

HFA: The element of time and the notion of transformation also often keep coming back.

TK: Yes, especially in pieces that deal less with representation and make use of the organic process of growth. I have been always fascinated by the possibility of growing bones. Technologies, such as 3-D scanning, allow me to capture bones as a structure that I often use as starting point. What interests me, however, is how to develop this existing static structure into something much more poetic and organic.

Recently I also started to work with a studio called ordinary and experimenting with crystals. We noticed that you could grow crystals when you provide the right eco-system around them. In my latest work, that I created together with ordinary, The Ecstasy of Saint Teresa (which you can see till the end of this week at Old Vic Tunnels in London, ed. note), the surface of a sculpture is entirely covered by crystals, growing over the period of six days and gradually changing the shape and the volume of the sculpture.

HFA: Looking at your work, two names come to mind: Roger Hiorns and Thomas Heatherwick. Four years ago Roger Hiorns transformed the interior of an abandoned apartment into a mind-blowing experience, using blue copper sulphate crystals. His work with crystals, but also his interest in visualising the inside, puts him within a similar narrative. Thomas Heatherwick’s organic shapes combined with architectural principles are also found in your projects. By which classic or contemporary artists would you say you were inspired?

TK: Since you mentioned Heatherwick: it’s quite significant that the rising star of the British architecture is actually a designer by trade. It is part of his allure – he brings freshness and innocence to architecture, which is otherwise difficult to have when you finish your architectural studies. It also suggests that architecture today is in a state of transformation and possibly coming closer to art than to engineering. Regarding Hiorns, we both use technology and chemical processes to invoke emotional and visual triggers.

But my main inspiration comes from classical art. One of my favourite places is Villa Borghese in Rome, where I saw the baroque sculptures of Gian Lorenzo Bernini. His Ecstasy of Saint Teresa was also a direct inspiration for my own piece of the same name, and my homage to the sculptor. Another work, Virtual Sunset – although entirely digital at its core – was influenced by Turner’s paintings. I admire the beauty of the old masters and ideally want to hide technology. Technology is a mean to represent an idea, a story; it shouldn’t become a fetish or a way to impress the viewer.

HFA: Earlier on you mentioned the advantage of having good network. How important are collaborations to you and how do you deal with the practical aspects of working with partners?

TK: I do collaborate regularly with others, but I wouldn’t call it my core philosophy. I see it more as the nature of the beast, a logical step when you work on crossover between art, architecture and science. Since I teach at the RCA and at AA, I can do many experiments right there, and I also often work with the UCL testing labs. So the universities network is very important for my research.

As for the practical side, an A4 at the start is probably the best you can do. You need to clearly discuss what will be the share of risks and costs amongst the different parties and based on that, also the share of the profits. Many projects can suddenly significantly grow in scope and it’s important to anticipate this ahead of time.

HFA: Our last question is: who would you recommend us to interview next?

TK: I’m thinking of Ruairi Glynn. He just made an installation called Fearful Symmetry for the Tate Tanks. It was a perfect example of a work, which – although technically very difficult – didn’t reveal any of its complexities on the surface, leaving the spectator with pure sensual enjoyment. Ruairi’s installations are crossovers between architecture, cybernetics and dance, so he is a good choice.

And you might also like to talk to Bernhard Martin, a friend and a great artist from Germany. The most famous unknown painter in Germany, as he sometimes refers
to himself.

HFA: That sounds very exciting! Thanks Tobias, it was a pleasure talking to you.


* MRI (magnetic resonance imaging) is a medical technique used in radiology to visualize internal structures of the body in detail. MRI makes use of the property of nuclear magnetic resonance to image nuclei of atoms inside the body.
** Voxel (volumetric pixel) is a volume element, representing a value on a regular grid in 3-D space. This is analogous to a pixel, which represents 2-D image data in a bitmap.

Bio
Tobias Klein, Dip. Arch (Dist.), M. Arch (UCL) was born in 1979 in Bonn, Germany. He studied Architecture at the RWTH Aachen, the University of Applied Arts in Vienna and finished his studies at the Bartlett School of Architecture in London.
In 2011 he founded Studio Tobias Klein, a practice operating in the area between art and architecture, across the fields of art and installation, experimental design, interactivity and sculpture.
He is the Unit Master of the Diploma 1 Studio at the Architectural Association in London and runs a Media Studies class at the AA. He has lectured and given workshops internationally, and was an invited critic at, Ecole Spéciale d’Architecture in Paris, The Bartlett, Cambridge, Brighton University, Oxford Brookes, London Southbank etc. Since 2010 he is an appointed Guest Professor at the TU Innsbruck; Studio 3, Institute for experimental architecture.
His work is internationally exhibited (Royal Academy Summer Show 2006, the Venice Biennale 2010, the ARAM Gallery) and published in various books such as, AD – Neoplasmatic Design (edited by Marcos Cruz), Digital Architecture Now (by Neil Spiller), Drawings (by Sir Peter Cook) and magazines – Architectural Review, Architectural Journal, BD, AD and Arch +. He lives and works in London. 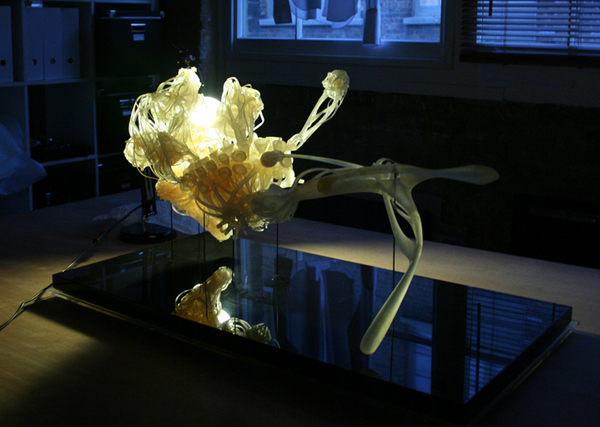 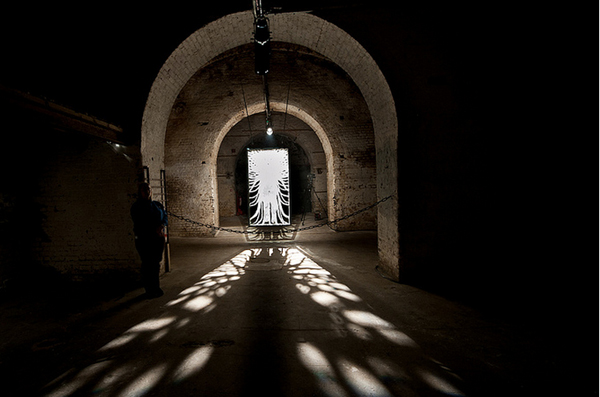 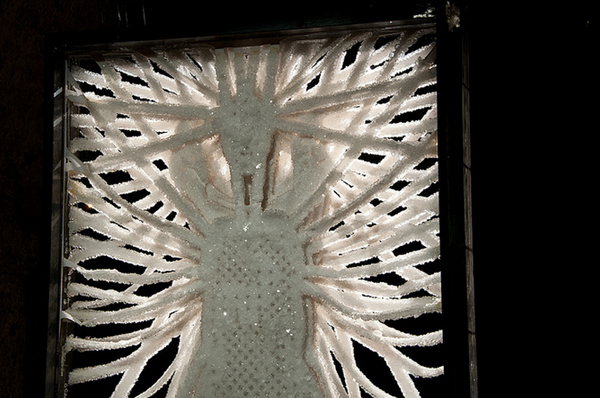 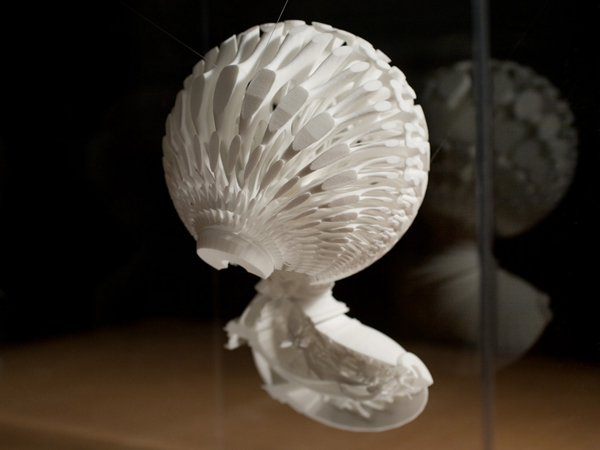 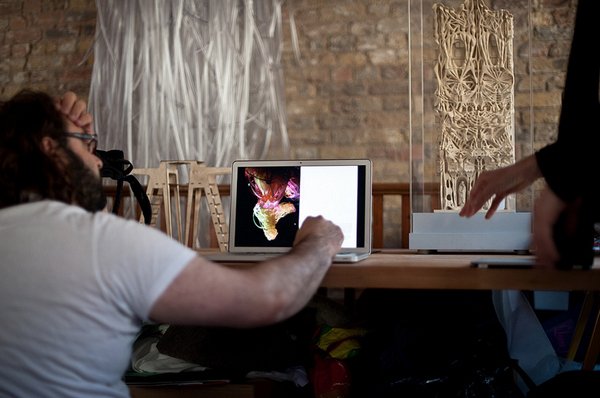 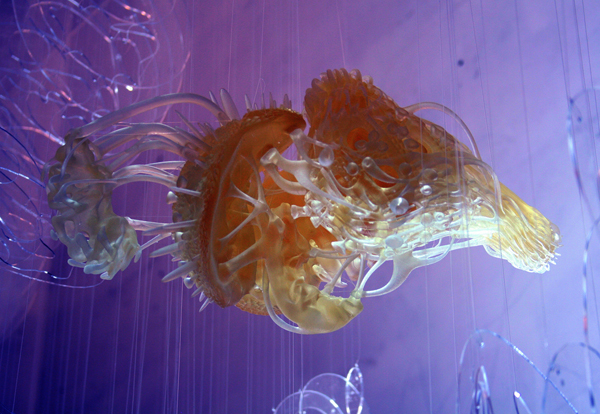 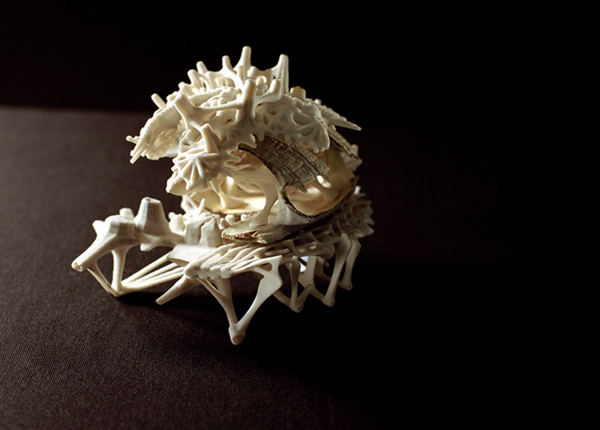 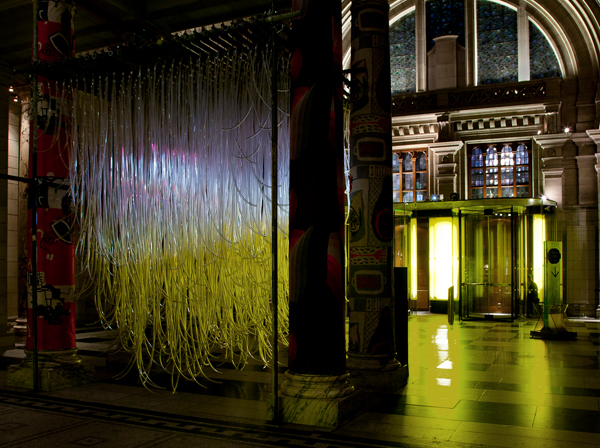 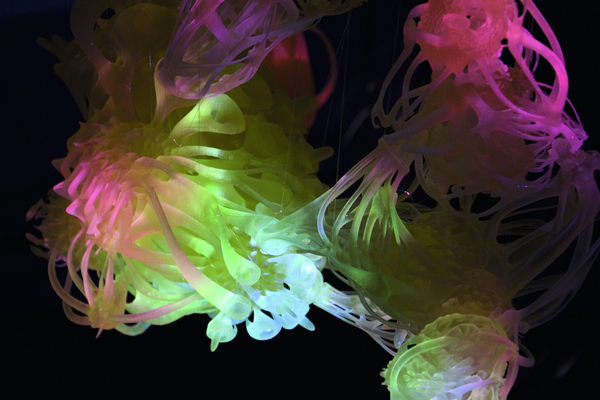 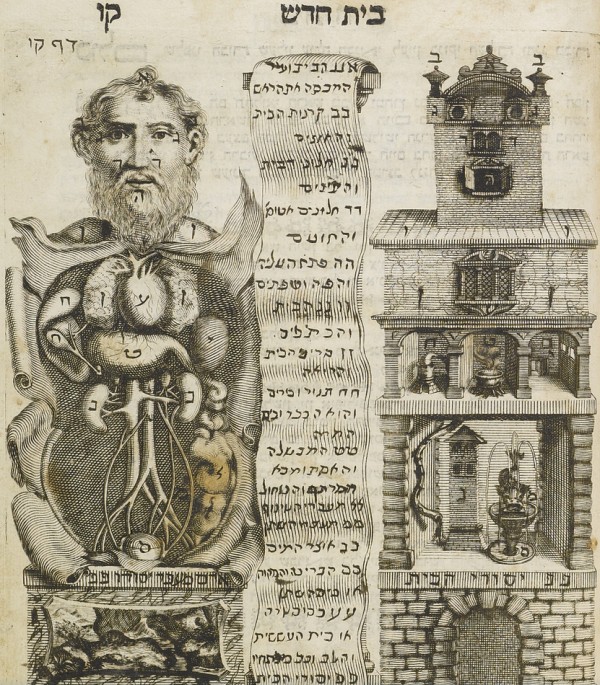