Hong Kong–based Art Statements hosts a solo show by the collective AES+F featuring their film and photo series The Feast of Trimalchio. AES+F is a group of Russian artists Tatiana Arzamasova, Lev Evzovich, Evgeny Svyatsky and Vladimir Fridkes, known for their controversial statements (such as the Islamic Project, dealing with the western society’s fear of Islam) and their fabulous photo compositions that combine modern technology, Hollywood cinema, fashion photography, advertising, mass media, popular culture and youth obsession with the sleek aesthetics of old masters’ paintings.

In The Feast of Trimalchio (inspired by Cena Trimalchionis from the Roman novel Satyricon) the original antique settings and characters are replaced with their contemporary counterparts. The resulting series of photographs depict scenes from a luxurious hotel – a temporary paradise which one has to pay to enter:

The hotel guests, the ‘masters’, are from the land of the Golden Billion. They’re keen to spend their time, regardless of the season, as guests of the present-day Trimalchio, who has created the most exotic and luxurious hotel possible. The hotel miraculously combines a tropical coastline with a ski resort. The ‘masters’ wear white which calls to mind the uniform of the righteous in the Garden of Eden, or traditional colonial dress, or a summer fashion collection. The ‘masters’ possess all of the characteristics of the human race – they are all ages and types and from all social backgrounds. Here is the university professor, the broker, the society beauty, the intellectual. Trimalchio’s ‘servants’ are young, attractive representatives of all continents who work in the vast hospitality industry as housekeeping staff, waiters, chefs, gardeners, security guards and masseurs. They are dressed in traditional uniforms with an ethnic twist. The ‘servants’ resemble the brightly-colored angels of a Garden of Eden to which the ‘masters’ are only temporarily admitted.

More images from the series are available on the artists’ website.
The exhibition runs until 7th of October. 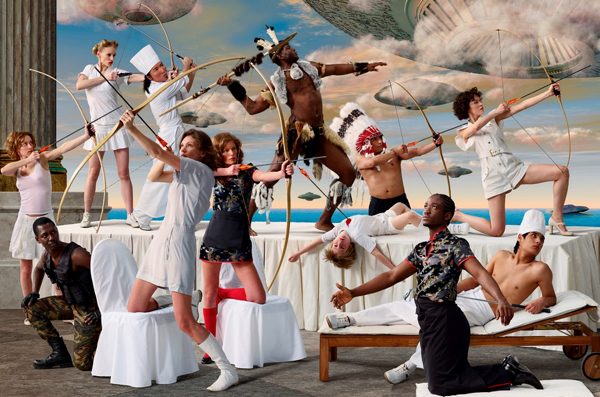 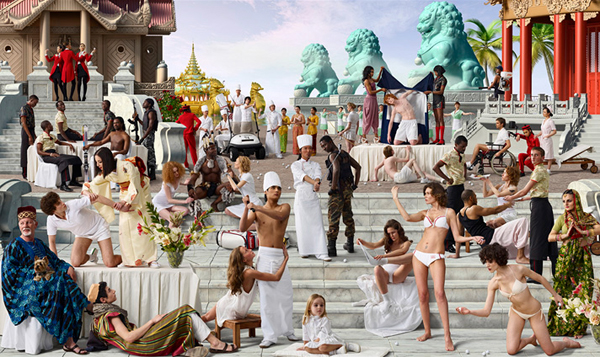